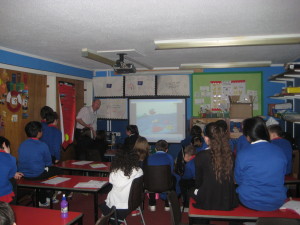 And the PAUSE button.

The basic technique is to choose a good short film (text).  There are many available with excellent teaching resources.  The Literacy Shed is a great example.  Listed further below are many more.

Watch the film before showing it to the class.  THIS IS IMPORTANT! Then, make a plan and focus on one or two areas, also, think about where you can pause the film to ask some questions such as:

Camera
i) What can be seen in the frame & why?
ii) What camera movement is happening & why?
iii) What height or angle is the camera at & why?
iv) What might be anything excluded from the frame?
v) If the camera is the narrator, what is it saying?
vi) How long is the shot?
vii) What was the previous/next shot & why?

Character:
i) What do we know (imagine) about this character?
ii) What do the clothes tell us?
iii) Where do they live?
iv) What do they eat?
v) What are their qualities? (emotional, skills, behaviour)
vi) What is their motivation/aim/desire?
vii) What are their obstacles to achieving their goal?

Colour:
i) What does this colour mean?
ii) Are any characters associated with a particular colour?
iii) Is there a tone/colour scheme to the film?
iv) Are the colours mostly light/dark?
v) Can colours change meaning?
vi) How is light used in the film?

Sound:
i) What does the sound track tell us?
ii) How is music used?
iii) What is the emotional content of the music?
iv) Find out what “diegetic” means
v) Identify diegetic sounds in the film
vi) What sounds are heard “off screen” or out of shot?

Story:
i) Discuss the story
ii) Does the story have a beginning, middle and end?
iii) Is the story clear? If not how could the film makers make it clear?
iv) How do all of the above contribute to the telling of the story?

The 8½ Foundation is a Scottish-based not-for-profit organisation dedicated to introducing world cinema to children. Its aim is to create a new birthday: a film birthday, at the age of 8½, that celebrates the power of cinema to expand children’s horizons and welcomes children into the wider world of movies, beyond what is normally available to them at the multiplex or on their TV screens.