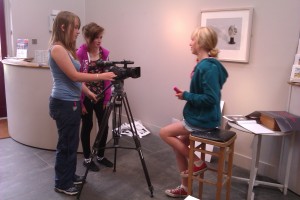 Every story has a narrator.  In film, it is the camera that is the narrator, although occasionally it is also one of the characters.  However, in good films, the camera SHOWS the audience what is (or is not) happening, and where, and how.  When screenwriters are not able to show the story, they use exposition, this is when a character in the film explains the story using dialogue.

Every shot in a film is chosen carefully and there are many reasons why the shot looks the way it does.  The director, and therefore the camera, is showing us something as part of telling a story.  The sequence in which the shots appear is also chosen very specifically (by the editor) which is again building the story.

In fiction films, everything we see in the scene has been put there and usually has meaning.  Audiences have learned how to decode all these clues to help build a narrative as the story (the film) is revealed.

The camera may well be hiding something from characters in the story but showing them to the audience.   In this way the director can build suspense.  In an interview, Hitchcock’s famous example is:
“There is a room with a table, under the table is a suitcase containing a ticking bomb.      The characters in the film are about to arrive in the room yet they do not know that     the suitcase is under the table, but the audience does – that is suspense.”

There are many wonderful short films, especially animations, that contain no dialogue, these films are especially useful. They illustrate how the camera narrates a story and can also help children learn how to write better stories.  Alma is one of my favourite:

There are many aspects that can be varied with the camera, the most basic, is shot size: from Extreme Close Up to Extreme Long Shot.  Here is a good explanation: