My first passion was music.  At 19 I landed my dream job – a trainee sound engineer in a recording studio.  After six months I realised this had its downside: egomaniacs, lack of daylight, ridiculous hours.  At 20 I had my next dream job.  I became a trainee engineer at the BBC Television Centre London.  After three years of boredom at the BBC, from watching TV twelve hours a day, I decided to get creative and studied for a dream degree in Film and Photography.   This was a very political and analytical course, it left me wanting simplicity.  I worked on a farm for a year.

Now, with a CV that made little sense, I felt a bit stuc 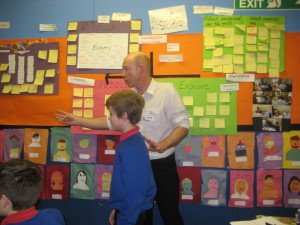 k but I was encouraged to enter teaching.  I became a primary school teacher and for the first time became truly stimulated, challenged, creative and compassionate.   I also began to use digital media in the classroom.

After eight years working in schools in England and Scotland, interspersed with theatre work, I felt that the children had taught me enough.  I set up EMPVideo to train teachers, to make films and to promote local third sector organisations.  Here you are and here I am.

I have kept a dream diary for thirty years.  I believe that film is strongly connected to dreaming.  My next big dream is to make a feature film.